Aurelius Coworks is a socially responsible company that balances purpose and profit. We develop, own, operate and consult on communities that make a real impact. Our coworking communities are built to support startup enterprises, small businesses and non-profits.

We connect our coworking communities to the surrounding ecosystem and contribute to the regional economy where we are located. Our members benefit from the statewide and national networks we have connected to. Our spaces are meticulously built, our communities carefully cultivated, and we infuse the right mix of business and social programming in each community.

Aurelius is particularly interested in building communities in middle markets and urban downtowns undergoing revitalization. We look for places that embrace startup culture, are committed to supporting the needs of entrepreneurs, and have emerging business sectors.

“I first learned about neighborhood revitalization growing up at my family’s corner store. I witnessed how our small city changed when the chemical plants closed and the manufacturing jobs left. The family store was the center of our neighborhood and became the place for conversations about urban life and the changing business landscape. I have dedicated my career to the transformation of small cities – from my work in politics, to my successful PR career, and now developing communities that have become a center of small city life for entrepreneurs.​”

Aurelius is wholly owned by Tom Nardacci, a veteran entrepreneur known as a leading advocate for the creative economy in upstate New York. In 2005, Tom created Gramercy after returning home to the state capital Albany after working in New York City and Washington, D.C. He grew Gramercy into one of the leading public affairs firms in New York. Gramercy’s clients have represented over $10 billion worth of economic activity in the state over the past decade. Tom was recently named to City & State’s Political PR Power 50 Rankings recognizing the 50 most powerful New Yorkers in PR. In October 2020, Tom was named to the Albany Airport Authority Board of Directors by the Albany County Legislature, upon the appointment recommendation of Majority Leader Dennis Feeney.

In 2016, Tom acquired a 14,000 square foot building on 4th Street in Downtown Troy that sat mostly vacant for 30 years and turned it into Troy Innovation Garage. The Garage caters to the Capital Region’s creative economy and tech sectors and is now home to 40 small companies. A number of Garage companies have taken advantage of the variety of programs and incubator services offered in the community. Garage companies have also raised millions of dollars in investment and capital.

Prior to starting his own companies, Tom’s career began as a Press Secretary for a member of the U.S. House of Representatives. He later directed public affairs for the Alliance for Downtown New York, lower Manhattan’s business improvement district (BID) and was involved in a variety of post-9/11 rebuilding projects initiatives. Tom is a graduate of Syracuse University and Columbia University. 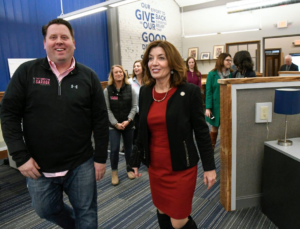